How to enter into a Contract 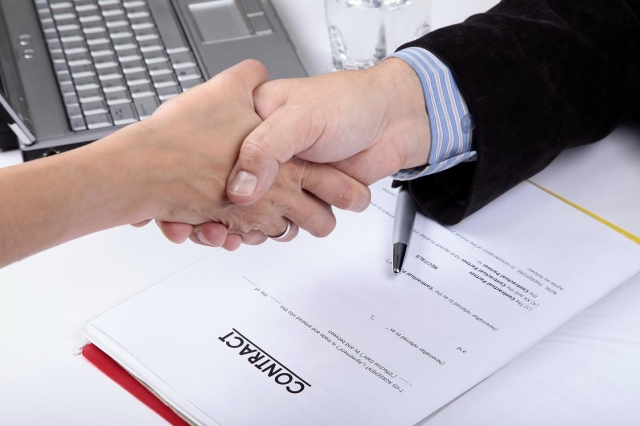 ENTERING INTO A CONTRACT: WHAT EVERYONE NEEDS TO KNOW

We enter into little contracts literally every day. When you order food in a restaurant, the kitchen makes it for you and the server delivers it to you in reliance on your promise to pay, and you eat it with the understanding that you will pay for it before you leave. That’s a contract. It’s not written up in a formal way and you did not sign anything, but it’s still a binding agreement.

Most contracts (though not all) do not have to be formal written and signed documents in order to be binding and enforceable on the parties. Verbal discussions can create binding contracts. An exchange of emails can create a binding contract. All it takes to create a binding contract is an offer by one party that is accepted by the other party along with a promise to give something (money, services, goods) to the other to make the deal happen.
Most people don’t realize that the law can actually fill in the blanks in many contracts to keep them valid. For example, your agreement may not be void just because you failed to mention the price you would pay for the other party’s goods -- the law can fill in that blank for you if necessary based on various factors.

In other words, it’s much easier to enter into a binding contract than many people realize -- which is exactly why so many people find themselves stuck in a bad contract with no easy way out.

Here are some practical tips that will help you protect yourself and your business when
entering into a contract:

1. Know Something About the Other Guy.

The person with whom you’re entering into this agreement does not have to be a family member or long-time friend, but you should know something about the person or business you’re about to rely on. The Internet makes it so easy to do a little research on the other party to the contract. Do they have a good reputation? A track record for honesty in business?

Do you know anyone or can you easily find anyone who has dealt with them in the past and has a favorable opinion of them? Most importantly – if you come across a red flag (something negative about the other party to your contract), don’t ignore it. Either find someone else to do business with or take steps to address the concern in your dealings with that party.

Even though most contracts do not have to be in writing to be binding and enforceable, you are a fool if you enter into any kind of significant contract without documenting the agreement in some way. If you enter into a verbal agreement, follow-up as soon as possible by sending the other party an e-mail confirming the terms of your deal. If they disagree with what you have written, they should respond and say so immediately; if they later dispute the terms of the agreement, their failure to respond to your e-mail can be used against them. Even just a confirmation e-mail creates some written record of your agreement and will provide you with some level of protection.

Whether you have a formal written contract or merely a confirmation email, the writing should include everything that is relevant to the agreement (see #3).
Avoid vague language such as “delivered as soon as you can,” and do not try to sound like a lawyer; just write in plain, simple language that everyone can understand.

To maximize your protection, the written record of your agreement should cover all the basics. The more detail, the better. Here are some items that you should include:

This is the part that most people leave out of their contracts and agreements… probably because it’s a little uncomfortable. It’s like writing a pre-nuptial agreement planning how a couple will divide up their property upon divorce before they have even gotten married. But this is really the most important part. The parties need to agree on how they can get out of the contract or how the contract will end. What will happen if one party wants out but the other one doesn’t? If one party breaches
the contract, how will the other party be compensated for that breach?

And what if a dispute arises? What are the parties’ options? Will they have to arbitrate or mediate the dispute first, before they file a lawsuit? What remedies are available to the wronged party? Can the prevailing party get his attorneys fees paid? Is there a specific state, county, or court where the parties agree that any lawsuits related to the contract should be filed because of fairness or convenience to the parties?

The more of these questions get answered up front, the more comfortable you will feel that your contract will be valid and performed, because the parties to the agreement have considered all possible negative outcomes and consequences.
When entering into a contract agreement, it is also necessary to look out for the following elements otherwise, the contract woul be void.

Elements of a Valid Contract

An agreement must contain four essential elements to be regarded as a contract. If any one of them is missing, the agreement will not be legally binding.

There must be a definite, clearly stated offer to do something. For example: A quotation by sub-contractor to the main contractor and an offer to lease.

An offer does not include ball park estimates, requests for proposals, expressions of interest, or letters of intent.

An offer will lapse:

An invitation to treat is a mere declaration of willingness to enter into negotiations; it is not an offer, and cannot be accepted so as to form a binding contract. An agreement is not created if there is an acceptance of the invitation to treat.

An invitation to treat is part of the preliminaries of negotiation, whereas an offer is legally binding once accepted, subject to compliance with the terms of the offer. For example: Invitations to treat are advertisements, price lists, circulars and catalogues.

Only what is offered can be accepted. This means that the offer must be accepted exactly as offered without conditions. If any new terms are suggested this is regarded as a counter offer which can be accepted or rejected.

There can be many offers and counter offers before there is an agreement. It is not important who makes the final offer, it is the acceptance of that offer that brings the negotiations to an end by establishing the terms and conditions of the contract.

Acceptance can be given verbally, in writing, or inferred by action which clearly indicates acceptance (performance of the contract). In any case, the acceptance must conform with the method prescribed by the offerer for it to be effective.

A contract requires that the parties intend to enter into a legally binding agreement. That is, the parties entering into the contract must intend to create legal relations and must understand that the agreement can be enforced by law.

The intention to create legal relations is presumed, so the contract doesn't have to expressly state that you understand and intend legal consequences to follow.

In order for a contract to be binding it must be supported by valuable consideration. That is to say, one party promises to do something in return for a promise from the other party to provide a benefit of value (the consideration)

Consideration is what each party gives to the other as the agreed price for the other's promises. Usually the consideration is the payment of money but it need not be; it can be anything of value including the promise not to do something, or to refrain from exercising some right.

The payment doesn't need to be a fair payment. The courts will not intervene where one party has made a hard bargain unless fraud, duress or unconscionable conduct is involved.

It is also important to realise that some contracts are required to be by deed otherwise it would be invalid. Examples of such contracts are agreements for the transfer of interest in land e.g. a Lease above 3 years, conveyance, assignments and mortgages.

Facebook Twitter Google+ LinkedIn Email
Related News
7 Candidate Problems and How to Get Ahead of Them Why your last hire failed: Mismatched skill sets Will Facebook be the next big recruitment tool? Top recruiting skills HR pros must develop today: How many do you have? 6 Essential Elements You NEED to Include in Your Job Ads
Latest News
A Word of Advice Before You Resign From Your Job Move Over Maslow: 3 Simple Ways to Motivate Your Employees 5 Key Elements for Human Resources Changeover 10 Best Job Interview Tips for Jobseekers 4 Signs your Resume is screaming Unprofessionalism all over 5 Leave Management Tips for HR Managers Career Progression In Nigeria: All You Need To Know To Outsource or Not to Outsource View More