Should bosses reward staff on their birthdays? 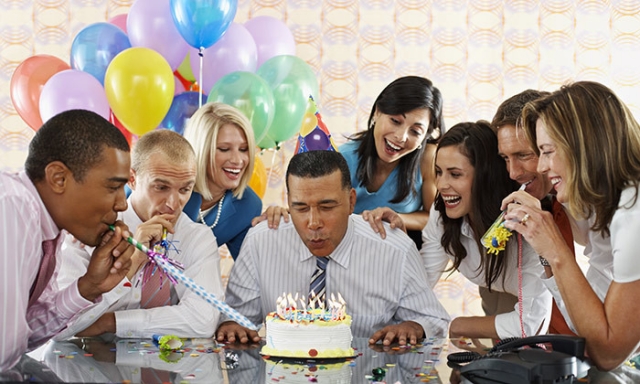 Birthday appears to be one of the most universally and popularly celebrated event ever.

It seems almost natural that the company should piggy back on this momentous moment to congratulate its employee as well.

Rewarding staff on their birthdays may serve as a tool to boost employee retention and engagement, team-bonding, be a part of the reward strategy or even as a vehicle of internal branding.

Rewarding staff on their birthdays may serve as a tool to boost employee retention and engagement, team-bonding, be a part of the reward strategy or even as a vehicle of internal branding.

There’s probably a section or procedure somewhere in the HR manual detailing what form and format it should take – either through token monetary (or voucher in lieu) form of varying amounts, paid or unpaid leaves, electronic greeting cards, birthday cakes, muffins, rewards points, paid holidays etc.

For the individual, the rationale for celebration is clear. But for the company, the effectiveness of the reward may not be so.

Thus, it might be interesting to do some thought exercises to see how effective the birthday reward is in achieving its perceived corporate aims.

As a retention tool

As with all benefit initiatives, the birthday rewards entails a budget and more often than not the quantum is probably going to be significantly less substantial in comparison to any pre-existing performance bonuses.

The reason is simple.

Birthdays are predisposed to be egalitarian. Everyone has one, and I would think it is safe for me to say that all birthdays are equal.

This means expense will scale company wide. It’s not that companies are not willing to pay but to what end?

Thus, I would argue that the birthday reward would rarely be effectual as a retention factor. Have you ever heard any potential job leaver saying, “I’m going to hold off my resignation because I am waiting to cash in on my birthday reward?”

As mentioned above, it would be a daunting task for the birthday reward to rival the compensation and benefits scheme, the performance management system or other pre-existing reward systems which had been precisely engineered for such a purpose; as that of a motivator.

Instead, even a simple “Happy Birthday” from one’s colleague or supervisor would be more meaningful.

I would think that if human touch was incorporated, positive results could be seen.

It can be through a personalised note from one’s supervisor, a small birthday treat or celebration with the team.

You need to put in effort if you want someone to feel appreciated. Motivate heart with heart.

Birthday celebrations could be one of the best platform a company can tap on for team bonding.

The personalised aspect of it takes away a great deal of the corporate undertone and presents employees with a good opportunities to get to know each other at a more personal level.

The resultant camaraderie thus developed would inevitably spillover at work.

As memories and photos of the event get shared and exchanged through the company and social circles, it warms hearts and people feel appreciated, personally, vicariously or otherwise.

If done long enough, it eventually becomes a part of the company’s culture and brand.

Perhaps HR professionals could consider spending more thoughts into aligning the birthday reward to the intended purpose in the way that thoughts are put into getting birthday presents for loved ones.

After all, the birthday reward is a birthday present from companies to their beloved employees.

Designing Rewards, Recognition and Incentive Programs - Where to Start

The Benefits of Blending Recognition & Performance Management Data Perks vs Pay: Why Getting the Balance Right Matters

You’ll Be Better Off Talking to Them About Pay
Latest News
A Word of Advice Before You Resign From Your Job Move Over Maslow: 3 Simple Ways to Motivate Your Employees 5 Key Elements for Human Resources Changeover 10 Best Job Interview Tips for Jobseekers 4 Signs your Resume is screaming Unprofessionalism all over 5 Leave Management Tips for HR Managers Career Progression In Nigeria: All You Need To Know To Outsource or Not to Outsource View More